Death is something we all have to face. We all have an appointment with it and we all will deal with it taking a loved one.

It is okay to be sad, to cry to grieve. It is natural. Jesus himself cried over the loss of his friend. (John 11:35)

I’ve seen my father cry, my uncles, both of my grandpas and many other men and women cry over the loss of someone they loved.

I never experienced what it was like to lose someone I was close to until 2011. I lost 2 people within 5 months of each other that I loved more than anything.

I got married on November 27, 2010. I was originally going to get married on June 11 of 2011. In 2009 my Grandma Nickels found out she had brain cancer as well as the lung cancer. In August of 2010 my Grandma got a report that her cancer was spreading and she decided not to take chemo or radiation. My Dad told me that with her condition and my Grandpa Wagoner’s failing condition that if I wanted them to be at my wedding I needed to have it before the end of the year. So we did. It was stressful putting a wedding together in a few short months but we did it. Both sets of my Grandparents were there. We got family pictures with them and as far as I know it is the last family picture that we have with them.

In January my Grandma’s health took a turn for the worse. June 8, 2011 she passed away peacefully with most of her family around her. My Grandpa was devastated. However, as soon as she passed away, my Grandpa started praising God! He lifted up his hands and said Thank you Lord for taking her home. He knew he’d get to see her again someday. He still misses her and I know that he cannot wait to see her again in Heaven.

October of 2010 my Grandpa fell in his bathroom and suffered some serious injuries. He was taken by ambulance to the hospital. He didn’t get better. His kidneys and other organs began to shut down. He was taken out of ICU on Monday night. He was supposed to go to Hospice but they didn’t think he would make the ride. They transferred him to another room where all of the family could be. My cousin and I went and got donuts for everyone from his favorite donut shop. We also got milk and OJ. All of us talked about the impact he had made on our lives. We said our goodbyes and I love you’s. He made it through the night, so Hospice came and took him to a nice room where he could be comfortable. All of his kids went home to take showers and get some rest. My Dad, my cousins Jennifer, Emily & Kammy and myself got to Hospice before anyone else arrived. Something told me to tell him it was okay. So I leaned over whispered in his ear, “Hey Papaw. It’s Whickemwhacker. I love you. You’re the best Grandpa a girl could ask for. It’s okay for you to go home. We’ll take good care of Grandma. I promise. Do you see all the angels? They’re here to take you to Jesus.” He took his final breath moments later. It was hard to say goodbye but I knew that Heaven was his home.

I became really depressed after he passed away. I felt alone. I had too much death too quick and I had no idea how to handle it. I hadn’t gotten over my Grandma Nickels passing away and now my Grandpa Wagoner was gone too. I dwelt on my sadness and sorrow. I became distant and unhappy. My Mom was staying with my Grandma Wagoner because she couldn’t be alone. Alzheimer’s has a way of taking independence along with many other things. I tried to help where I could with my Grandma and with my parents’ house. It was hard and it was hard seeing my family hurt.

One day something that my Aunt said after my Grandma passed away hit me. We need to pick up the mantle that she left. My Grandma was a prayer warrior. She prayed about everything! Everything! Big or small! She left it in God’s hands because that was the best place it could be. She loved everyone. She helped whoever she could whenever she could. She fed people, clothed them and loved them unconditionally. My Grandpa Wagoner helped people all the time. He gave people jobs, confidence and hope. He loved unconditionally as well. He stayed alive through the hurt and pain just to take care of my Grandma because he didn’t want to burden any of his kids with that.

Both of my Grandparents didn’t let sadness or problems doom them. They got back up and kept going. They wouldn’t want me to let sadness take over. They were true examples of what Christians should be. Now I try to love everyone unconditionally, even when it is hard and when it hurts. I try to show love instead of anger. I try to see situations through others’ eyes so I can understand. I believe that is what my Grandparents would want me to do. It is also what Jesus would want me to do.

I said all that to say this. Take time to grieve. However, don’t stay in that state. When someone you love passes away, pick up that mantle they left behind. Follow Jesus and love unconditionally. I have hope of seeing my Grandma and my Grandpa again someday. They were born again Christians and so am I. There is so much hope in that statement. Being a follower of Christ, we should try to live like Christ. It is easier to do if you have good, Godly examples to follow.

I pray for those who read this blog. I want you to know if you are hurting, God can help you. He can give you strength and carry your burdens. 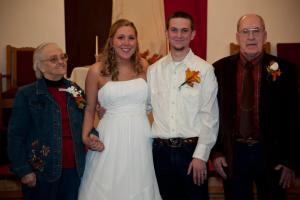 On another note I’d forgotten how much weight I’d gained before I got married! I’m down like 30lbs from that pic haha